What Are We To Think about Mary?

Of all the eight girls in my mother's family, Mary is the most puzzling, perhaps because no one ever talked about her. The other seven came alive in my imagination as I listened to the sisters talk about their life growing up in the hills of Pennsylvania. But Mary? Oh, I knew she was there, in a vague sort of way.  I tended to think of the sisters in groups of two.  Ella and Minnie were the old ones; they married within a year of one another, and had children who were the same ages as my mother. Lola and Pearl were forever joined in my mind because they shared a house for years while I was growing up. If we visited one, we visited both.  Florence and my mother were the two youngest girls, separated by only two years and sharing the dubious distinction of being the two disappointments  -- the family's only son had died at the age of two, and these two were failed attempts to produce another heir.  And then there were Grace and Mary, linked in my imagination because they had both died at young ages, before I was born.

I had always assumed that Grace and Mary were about the same ages, within a year or two, falling before the birth of the only son but after Lola and Pearl.  Then one day, when I was old enough to understand, I witnessed Aunt Lola attacking her younger sisters for their failure to support Mary's son during a terrible crisis in his life. "You treat Carlyle the same way you treated Mary. You pretend he doesn't exist.  All the time I was growing up, I was the only one who defended and took care of Mary. The rest of you ignored her." I was taken aback when I remembered a 1900 Census that showed that Mary was the second child, some six years older than Lola. So why was a child "caring for and defending" a sister who was much older than she was?

Again, family pictures bring a possible explanation. Mary appears only in formal, staged portraits, and she is always next to her mother, in at least one being held forcefully in place. 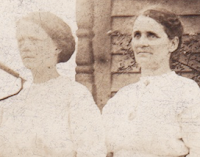 The other girls  usually have characteristic expressions on their faces--Lola looking worried, Florence being smug, Minnie with a smile, my mother with her head cocked flirtatiously, Ella serious behind her glasses, and of course Pearl off to the side in her ill-matched dress. But Mary? Her expression is curiously blank. There's no personality there. Even in the four-generation portrait of her mother, her son, and her granddaughter, her face is vacant. The child is perched on her lap but her lands lay useless on either side of the child, not holding her as a grandmother might be expected to do. 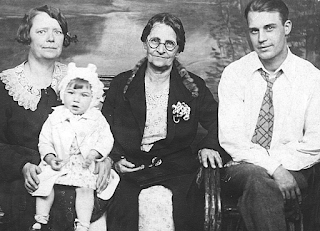 Other census records offer a few more clues.  At the age of two, Mary's son, Carlyle, appears in Lola's household, listed as her "adopted son." Ten years later he is living with his father. In both census records, Mary lives with her mother. Apparently she was not capable or interested in raising her own child.

I am tempted to guess that Mary fell somewhere on what is now the autism spectrum. There were also vague suggestions that she had an unusual birth -- perhaps "born with a caul," the rumor went -- a membrane over her face, or perhaps the umbilical cord wrapped around her neck.  Perhaps she had experienced some sort of brain damage.  Whatever the cause, it's obvious that Mary suffered from some disorder or disability -- something that was seen in the 1880s as shameful, something to be hidden away. How sad her story becomes in that light!


Posted by Carolyn Schriber at 7:00 AM