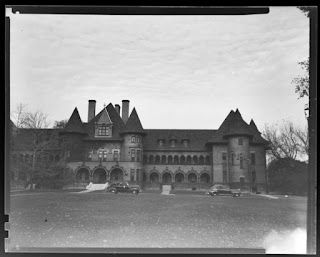 I grew up in Massillon, Ohio, a steel town of about 30,000 people. The other McCaskey sisters and their families ended up either staying in Ellwood City, PA, or moving to Canton  or Akron, Ohio. My parents chose Massillon, not because of any prior connection, but because the railroad ran a bus between Massillon and Brewster for its employees, which meant that my mother got to have the family car during the day, while my father walked two blocks and caught the bus to work.

Massillon had only two distinctions to its credit. The local high school had a crazy-good football team; the legendary Paul Brown of the Cleveland Browns got his start there as the head coach at Massillon High, and he was followed by such other rising stars as Tom Harp (Cornell, Duke, and Indiana) and Lee Tressel (father of Ohio State's infamous Jim Tressel.) The other distinction (not so glamorous), was that the first North American institution for the treatment and incarceration of the criminally-insane was opened in Massillon in 1898 under the auspices of  US President William McKinley, whose family came from near-by Canton. 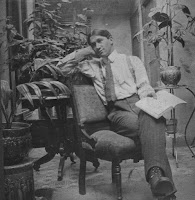 And what does that have to do with the McCaskey family, you ask? Well, Aunt Lola's husband, Frank Connor, became a frequent patient at what was called the Massillon Insane Asylum. It later  had its name changed to the Massillon State Hospital, but that " insane asylum" was a label it never escaped. Uncle Frank had always been a little strange, my mother told me.  Here's a picture of him as a young man, By day the driver of a butcher's meat wagon, by night a flamboyant tent revival preacher, he began to have periods of hallucinations and violence in the 1940s. My childhood sleep was periodically interrupted by a middle-of-the-night phone call from Aunt Lola (or her sister Pearl who lived in the same house) asking for help because Frank had Lola locked in the bathroom, or was chasing her around the house with a butcher's knife. Invariably we all got up, dressed, and drove to Canton, where my father's gruff voice could get things under control until the police arrived to place Frank in restraints and haul him off to the insane asylum.

He would stay there for days or weeks, until they decided he was no longer a danger to himself or others. Then he would be released - - until the next time. Aunt Lola did not drive, so she could only visit him if my mother took her to the hospital.  Usually I went along, but would be left alone in the car, while the two women went in for a visit. Of course those were days when car windows went up and down with a crank handle, and doors looked with a push button, not some airtight electronic system. So it was probably not as unsafe as it sounds today, but I still remember huddling in that back seat, all by myself, terrified that one of those "homicidal maniacs " would come bursting out of the asylum to get me. 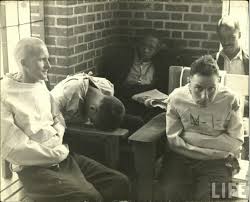 Gradually Uncle Frank's stays grew longer and the periods between them shorter.  What was wrong with him? The only term I ever heard used was "criminally insane." He may have been a paranoid schizophrenic, or, as I think more likely, simply a victim of a little-understood Alzheimer's Disease, terrified by waking up and not knowing where he was or who that woman was in his bed.

How did they treat him at the hospital? Again I don't know, and there are no records left,  All patient records were systematically destroyed as the years passed.  It was not a pleasant place, I know. Pictures like this one suggest that their patients spent much of the time in straitjackets.  There was talk of shock treatments.  Whatever they did, it was not very effective. In 1958 he died there.

Posted by Carolyn Schriber at 12:45 PM