Aunt Lola and Her Chickens 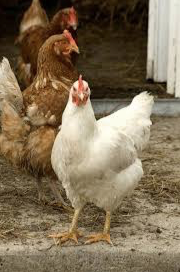 One day Uncle Frank came home upset about the price of eggs.  Who knows what it was -- five cents, maybe. Anyhow, he informed Aunt Lola that if she wanted eggs from then on, she would have to get a chicken -- which she did, because Lola always did what she was told.

She tried raising the chickens in the back yard, but the neighbors complained, so she moved them into the basement.  Can you imagine what that did to the house?  For years afterwards, the entire house smelled like chicken droppings. They got rid of the chickens, but they never got rid of the smell.

And speaking of chickens, one of the family legends concerned a chicken dinner at which there was an unexpected guest, so that by the time the plate of chicken was passed to Lola, all that was left was the tail.  She took it, uncomplaining as always, and professed to find it delicious. So from then on, everybody saved their chicken tails for her, and she ate them for the rest of her life. 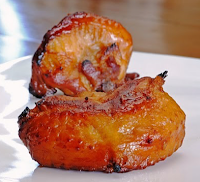 The same story also spawned a famous family quote.  When she was asked how she liked the tail, her answer was "It was good, what there was of it." Then, afraid that sounded like a complaint, she added, "Oh, there was enough of it, such as it was."

Posted by Carolyn Schriber at 6:00 AM