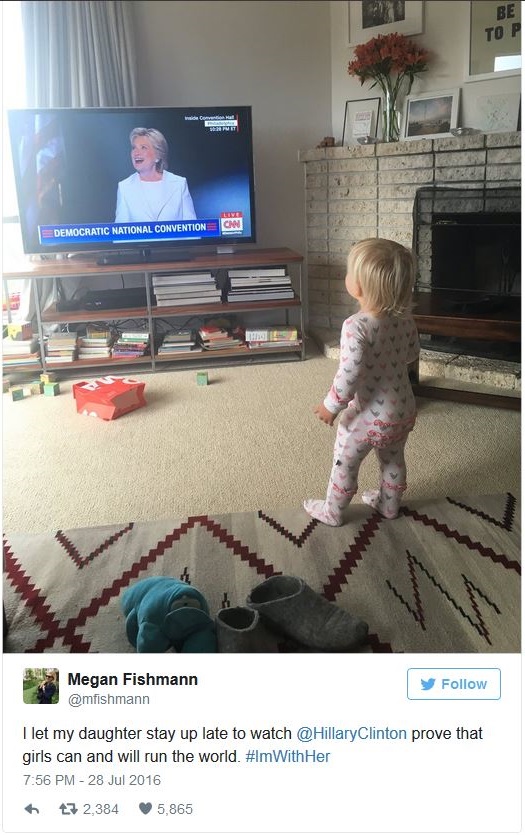 I've shared this from my Facebook feed.  Thank you, Megan.
Posted by Carolyn Schriber at 8:16 AM No comments:

The Fourteenth Amendment went into effect on this date (July 28) in 1868. That means it has been the law of the land for 148 year. The full text reads:

Section. 2. Representatives shall be apportioned among the several States according to their respective numbers, counting the whole number of persons in each State, excluding Indians not taxed. But when the right to vote at any election for the choice of electors for President and Vice President of the United States, Representatives in Congress, the Executive and Judicial officers of a State, or the members of the Legislature thereof, is denied to any of the male inhabitants of such State, being twenty-one years of age, and citizens of the United States, or in any way abridged, except for participation in rebellion, or other crime, the basis of representation therein shall be reduced in the proportion which the number of such male citizens shall bear to the whole number of male citizens twenty-one years of age in such State.

Section. 3. No person shall be a Senator or Representative in Congress, or elector of President and Vice President, or hold any office, civil or military, under the United States, or under any State, who, having previously taken an oath, as a member of Congress, or as an officer of the United States, or as a member of any State legislature, or as an executive or judicial officer of any State, to support the Constitution of the United States, shall have engaged in insurrection or rebellion against the same, or given aid or comfort to the enemies thereof. But Congress may by a vote of two-thirds of each House, remove such disability.

Section. 5. The Congress shall have power to enforce, by appropriate legislation, the provisions of this article.

There have been some modifications, of course, particularly in section 2. The Nineteenth Amendment gave women the right to vote, and the Twenty-Sixth lowered the voting age to eighteen.  Sections 3 and 4 have reference to the Confederacy. But Section 1 remains the foundation of this country's democracy. Why have so many people forgotten this fundamental statement?
Posted by Carolyn Schriber at 3:22 PM No comments:

Philippina Jung Schweinsberg's daughter Maria was born on this date, July 20, 1862. She died on May 2, 1871, at the age of eight. We tend to forget how precarious life was in those days.

This tiny lady, Philippina Jung, is the maternal great-great-great-great-grandmother of my youngest cousins in Ohio: Amanda, Haley, Olivia, Mitchell, Logan, and Jessica.  She was born on August 5, 1831 in Dietschweiler, Kusel, Rheinland-Pfalz, Germany and  died in Lawrence County, Pennsylvania, on July 25, 1906. This picture was taken around 1901.

Today would have been her 163rd wedding anniversary, She married Johan Frederick Sweinsberg (who had emigrated from Hesse, Prussia, in 1852) on July 17, 1853. Together they had nine children, and she outlived seven of them.

Their third child and oldest daughter was Karolina, who married Joseph McCaskey, the youngest brother of James McCaskey, our family's own Civil War casualty and the subject of my book, "A Scratch with the Rebels." Karolina's eight daughters included my mother, Margaret, and her next oldest sister, Florence Decker, from whom all the above-named cousins are descended.

Posted by Carolyn Schriber at 9:19 AM No comments:

Amazon Has Some Suggestions for You

Take your pick: a creative biography, a historical monograph, or a novel. 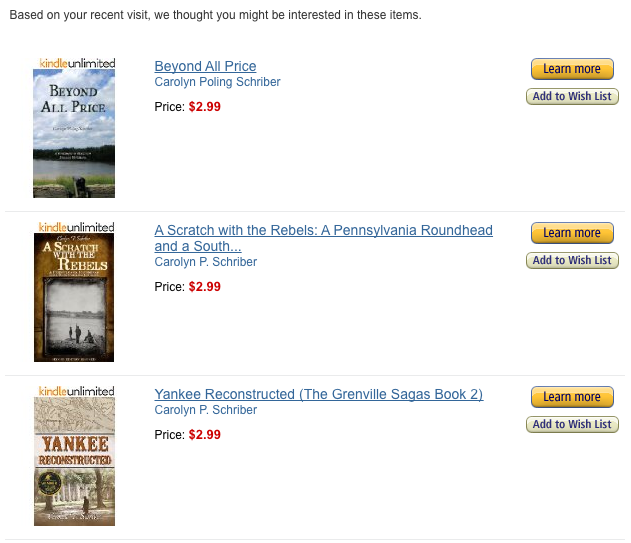 Posted by Carolyn Schriber at 6:37 AM No comments:

What we call "Bastille Day" is the French national holiday, marking the beginning of the end for the French monarchy and the rise of the French Republic.   What happened? A mob of revolutionaries (300, maybe--estimates of their numbers vary, since they increased as the day went on) attacked an infamous fortress that was being used as a prison for political prisoners. No one was quite sure how many prisoners were there, either, because none of them were ever brought to trial.

One of its most famous inmates was the Marquis de Sade. You may remember him as the French aristocrat whose claim to fame was as a rapist, a pedophile, and a writer about explicit acts of sexual cruelty. His name gave rise to our word sadistic. Anyway, in 1789, he was locked in the Bastille on a charge of treason, but the walls could not silence him.  Several days before the riots broke out, he was caught hanging out of one of the windows and shouting about prisoners being murdered inside the Bastille. He was quickly removed to an insane asylum, so he missed the beginning of the revolution. Once it started, however, he was freed and continued his exercise of perfect freedom unrestrained by morality, law, or religion—free, that is, until Napoleon had him recommitted to the asylum in 1803 for various acts well beyond the standards of morality. He died there in 1814.

But back to the Bastille. On July 14, a violent mob attacked the Bastille because of a report that it also held a large cache of ammunition and gunpowder.  The commander had several cannons, but in an attempt to pacify the crowd, the told them the cannons were unarmed. Instead, the mob took that as an invitation to take control of the fort.  At the end of the ensuing fight, about 200 attackers were killed, along with the hapless commander and seven other  defenders. The mob took control of the armaments and released the seven pathetic prisoners, who turned out to be minor offenders, not  the symbols of royal oppression they had hoped for.

Nevertheless, the Storming of the Bastille marked the beginning of the French Revolution and the eventual doom of Louis XVI and his cake-eating queen, Marie Antoinette. The first celebration of the  Fête de la Fédération was held on July 14, 1790. Reports of the occasion speak of a four-day celebration of freedom marked by fireworks, lots of wine, and people running naked through the streets to display their “freedom.” Be that as it may, the celebrations continued every year. As an uninformed tourist in Paris on July 14, 1983, I learned the hard way that no one sleeps in Paris on that night while the revelry continues in the streets.

Posted by Carolyn Schriber at 9:08 AM No comments: