There's a Child in Every One of Us

Last fall, at the annual conference of the Military Writers Society of America, I served on a panel discussing the writing of children’s books. We identified several characteristics that made a book popular with children. Among them were these:
1.     Children want to feel that little people are as important as big people, and sometimes they are smarter, too.
2.     Parents and other adults are often faceless, and sometimes they disappear altogether. Children’s stories use a child’s point of view, both figuratively and literally.
3.     Children value fairness. They want to see the good guys win and the bad guys suffer.
4.     Children can handle terrible, frightening events, so long as everything comes out all right in the end.
5.     Animals have the same feelings as people do, and of course, they can talk to each other. They understand English, too, even if they don't speak it.
6.     If someone doesn’t know a word, it’s OK to make one up.
7.     Children are language connoisseurs. They love rhythm and rhymes, and repeated phrases and refrains help them remember the story.
8.     Body noises are always hilarious. 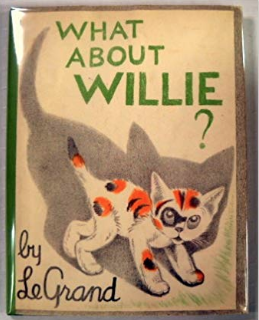 I remembered those points yesterday when I finally got to re-read my childhood’s favorite book, What about Willie? So how did this 79-year-old book stack up to today’s standards? There were obvious details that marked the book as somewhat outdated. It measured 8 ½ by 11—pretty awkward for small hands to hold. It contained fewer illustrations than I remembered, and the print was surprisingly small. But the story itself? It was spot-on-target. The only things missing were the body noises, which might have been too much for the proper manners of 1939.

The little boy in the story has no visible parents, and when other adults appear, the reader sees only their shoes. Willie, the lost kitten, suffers terribly. He even comes close to drowning when he gets tangled in a fishing line and a catfish tries to pull him under. But by the end of the story, Willie has a warm home, a soft bed, and a full tummy. The mean old catfish gets eaten for breakfast! Willie had no trouble understanding English when an old lady yelled, “Scat!” and he easily turned the word into action as he “scatted.” The refrain of “Willie was cold, Willie was wet, Willie was hungry, Willie was lost” repeats until the end of the story, when it becomes (Willie was warm, Willie was dry, Willie was full, Willie had found a home.” The only missing element was a loud satisfied burp at the end of that catfish meal.

The verdict? “What About Willie” is still a winner. And children have not changed as much as we old-timers would like to think.

Posted by Carolyn Schriber at 1:17 PM No comments: