A Prescription for a New House 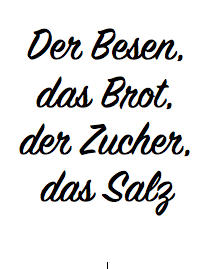 "This is an important ceremony. First I take a broom in. That’s to sweep out any bad luck and to make sure that our home is always free from hidden dangers. Then I have a loaf of bread, which promises that the family will always have our daily needs met. Next comes a cup of sugar, to add love and sweetness to our lives. And finally, there’s a shaker of salt, to give our lives here flavor and fun.” Katerina gathered her small basket and made a show of stepping into the cottage and arranging the ceremonial items on the shelf in the kitchen. “Now, with God’s blessing, we are ready to move in!”

"Yankee Daughters," Chapter 17
Posted by Carolyn Schriber at 9:27 AM No comments:

From time to time, I'm going to post some clippings from my Pinterest board entitled "Words of Wisdom from a German Grandmother." Each of them plays a role  in my upcoming book, "Yankee Daughters." 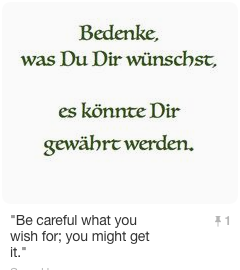 Posted by Carolyn Schriber at 8:50 AM 3 comments:

A Preview of Coming Attractions

This has already been posted over on Katzenhaus Books, but I'm repeating it here to make sure everyone receives the announcement.

A special "heads-up" for those who are awaiting the third volume of the Grenville saga. "Yankee Daughters" will not be available until sometime around the end of the year. However, I have started two new Pinterest boards to whet your curiosity.

One contains the names of all the new characters being introduced in this third generation of the family. Many of them are based on members of my mother's family, so I've used those real pictures to illustrate the fictional characters. I've changed their names, but there's often a hidden clue. For example, if I had an aunt named Rose, her fictional name might show up as Lily or Iris.

The second board draws on other illustrations of the real pertinent objects, events, and places in the novel. Many were old photos taken in and around Beaver County, Pennsylvania. Others are "ripped from the headlines" of contemporary newspapers. The idea here is to immerse you in the period, roughly from 1886 to 1920.

And eventually (maybe even today)  there will appear a third board dedicated to the repertoire of "wise old sayings" -- the majority of which were cited as Biblical truths by my grandmother (who is Katerina McDevlin Grenville in the new book) and passed down through her eight daughters. Some of them are better in German than in English, but you'll get both versions.

Hope you'll drop by and get a taste of what is to come. You can  find them all on my Pinterest page:  https://www.pinterest.com/roundheadlady/
Posted by Carolyn Schriber at 5:34 AM No comments: