Go ahead. Fall in Love with a Rich Man. 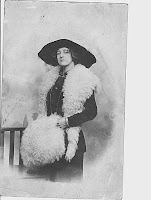 That was her mother's advice. Grace always remembered the mantra her mother taught her: "It's as easy to fall in love with a rich man as it is to fall for a poor man." And Grace did her best to comply. Of course, in her position as the sixth daughter in the family, she grew up seeing what happened when you didn't listen to Mama. Emma was married to a teacher -- nice guy, but poor,  with his nose in a book. Minnie loved her coal miner but they never knew the meaning of modern devices. Mary had her fat, coarse farmer husband who cared only for food and sex. Lola's lot was a butcher who wanted to preach the dangers of hell. And there was Pearl, who believed that no man was better than any man.

Grace left home as soon as she finished high school. Off she went to the "big city," where the rich guys were supposed to be.  She deliberately set her cap to catch somebody who had money. Kaufman's "Big Store" in Pittsburgh seemed a likely hunting ground. (To understand her story, you need only think of the shop girls in the recent "Mr. Selfridge" series on HBO.) The pretty little shop girl from Ellwood didn't take long to capture the attention of one wealthy "dandy," and she soon found herself afloat in luxury.  Pictures of her in those years always show her in staged settings, wearing the most fashionable of outfits. 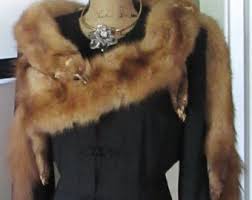 Margaret, the youngest of the sisters, idolized this older girl who seemed to be leading a charmed life. Margaret talked endlessly about Grace's beautiful yellow diamond solitaire engagement ring, and her stole of three stone marten furs. It was made of three skinned animals, intact down to its beady eyes and sharp little claws. Each skin seemed to be biting the next one to hold them all together as they draped around one's shoulders.

Sadly enough, Grace's life of luxury did not last long. With the collapse of the stock market in 1929, her rich husband lost his entire fortune, and in what may have been a fit of utter despair, he and Grace set out from Pittsburgh in his fancy Pierce Arrow Runabout. The car crashed, and Grace was killed.

Ironically she had willed her youngest sister the two items she knew Margaret most admired -- the ring and the stole. And I, in turn, inherited both of them. The stole ended up in the costume closet of the theater department at the college where I taught, but I confess I still wear the ring. It serves as a reminder that objects may last, but the people who so value them do not.

Posted by Carolyn Schriber at 6:30 AM