Aunt Minnie and the Outhouse 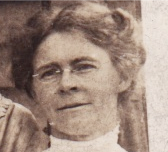 The Swicks were  in many ways the typical western Pennsylvania family at the beginning of the 20th century.  Minnie was my mother's second oldest sister. She married John, a coal miner, in 1900 and lived happily with him for 48 years.  He moved out of the mines, I suspect at her demands, and went to work in the local steel mill, which was just as dirty a job but marginally safer.  His son, Hilliard, followed him into the mill, but John campaigned hard  to keep Hilliard's sons, Billy and Chester, out of the mill, as well as the mines.

Minnie was a loving and kindly woman, always concerned with the welfare of others but wanting nothing for herself.  When she died in 1948, she still lived in their original house -- no running water  -- only an outhouse and a pump in the kitchen sink.  The house stood along a fairly busy road outside of Ellwood City, and at her request, John had a gas pump put in the front yard so she could make a bit of pin money during the day.  And later, they added a small lean-to on the side of the house, where the children sold candy to their friends.

As a child, I was fascinated by Aunt Minnie's outhouse.  It sat out back among the trees,
And I thought it was great fun to use it.  Not until I was much older did I realize what a living cliché it was.  It was a two-seater,  which meant my mother often went with me and we would sit side by side. 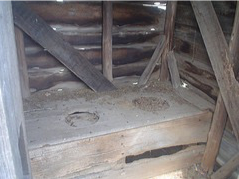 Toilet paper was an unknown luxury, but I was always eager to discover what old book Aunt Minnie was using -- maybe the Sears catalog, or an old telephone book.  We'd rip off a page, and then I'd sit there and read it before using it.

Then there came the year when  we were warned not to approach the outhouse without making a lot of noise.  It seemed that a porcupine had moved in, because he loved to chew on wood. If we were loud enough, he would run away. But if we startled him in the doorway, he might stick us with his quills. I remember singing all the way to the outhouse, hoping to see him come scurrying out.

I never met him, but he made a good story for one of my novels many years later. (See Damned Yankee, Chapter 30.)

Posted by Carolyn Schriber at 6:00 AM