I Have Just the Thing To Cure You of What Ails You. 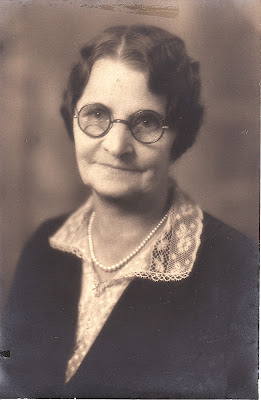 Caroline McCaskey, mother of these eight girls, was left a widow at the age of 52, and with six daughters still at home, she needed some way to support the family.  The farm might feed them, but it could not earn enough to pay the mortgage on the land, or to buy those supplies she could not grow in her kitchen garden.

What did she know? Well, she knew how to take care of people. She'd been doing that all her life.  So out she went to solicit jobs as a practical nurse.  She had no medical training, of course, but she knew how to make a mean chicken soup, cool down a fever, and lay soothing hands upon a suffering patient. She also picked up a number of home remedies from the local doctors, who showed her how to brew up a cough syrup or a pain-relieving ointment. One of the doctors she worked for was a homeopathic physician, and from him she obtained a great many treatments based on the theory of "the hair of the dog." If an illness had been caused by too much of a substance, a homeopath believed, the cure might be very dilute amounts of the same substance. (That is, after all, the basis of the theory of vaccinations.) But most important, she was a kind, gentle woman with a soothing voice and a loving spirit. If she did not cure anyone, her presence still made her patients feel a little better.

Over the years, only her daughter Lola followed somewhat in her footsteps. While Lola never called herself a nurse, she spend the years after her husband's death taking care of older people who simply needed someone to care about them. The other daughter who inherited some of the knowledge that Caroline had gained was my own mother, Margaret. Now, I'm not claiming that she was even remotely qualified to be a nurse, but Caroline lived with Margaret all her life, and when she died, it was Margaret who inherited all those little vials of murky liquids and mysterious little pills that represented her homeopathic medicine chest.

Many of the remedies survived into my childhood, and I clearly remember a cupboard in our kitchen that I was strictly forbidden to open. I did, of course, every chance I got, just to look at the bottles and wonder what magic potions they contained. The pill  offered to me most often was "Mother Sill's Seasick Remedy," since I had an unfortunate habit of throwing up in a moving car.  But there were also the bottles of pills whose labels contained only numbers. There was Remedy # 10 and # 7, and #14. One was for fever, another for stomach pain, a third for headache. The pills were all white and tiny. They looked something like those tiny candy balls you can now buy to decorate cupcakes. They all tasted sweet, too, like they were made of sugar (which they probably were.).

There were other bottles with more dangerous medicines.  There were dark glass bottles labeled "Tonic," which could have meant anything, but which was a code word for an opiate of some sort. My mother always kept a bottle of "Aromatic Spirits of Ammonia" handy in case of fainting spells. And next to it was a bottle of "Sweet Spirits of Nitre," (more commonly known as saltpeter), which besides its rumored effect on a teenaged libido, also served as a remedy of fever and nausea, a diuretic, a muscle-relaxer, a sleep aid, and a remedy for "a pain around the heart." It might even have been somewhat effective, given that its compound is closely related to digitalis. Be that as it may, I remember many an afternoon during the war years, when my mother waited, heart pounding in terror, for the mailman. Then, once reassured that my soldier brother was probably alive for another day, she sent me to my room while she sipped on a little spirits of nitre diluted with water, and promptly fell asleep on the davenport.

Eventually those bottles disappeared, and no permanent damage was caused by any of them, so far as I know. Still, when I think of the old McCaskey house in the hills of Pennsylvania, I can't help but imagine Caroline's home remedies that were all that stood between illness and health at the beginning of the twentieth century.

Posted by Carolyn Schriber at 1:22 PM