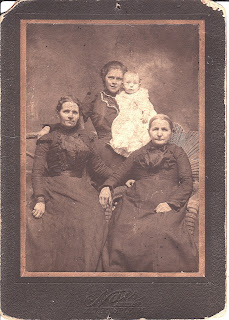 My grandfather, Joseph Lyle McCaskey, was all Scotch-Irish, but my grandmother, Karolina Schweinsberg, was German. Her parents (who would be my great-grandparents) were Johan F. Schweinsberg, (1831 - 1892) born in Prussia, and Philippine Jung, (1831 - 1906) born in Rheinland-Pfalz. I do not have a marriage date or an immigration date for either of of them, but their first child was born in western Pennsylvania in 1847, when they were both only 16 years old.

I can trace Johan's family back one further generation, and the Jung family for three generations, taking me to some great-great-great-great-grandparents living in Rheinland-Pfalz at the beginning of the eighteenth century. There are no details, however, beyond birthdates. Having found neither any horse-thieves or any relatives that seem closely connected to a great philosopher, I am content to let buried ancestors stay buried.

I was curious, however , about my grandmother's siblings -- wondering why I did not hear more about her brothers and sisters.  A little probing turned up some sad details.
Family tally:
With that in mind, take another look at the picture at the top of this page. That's Karolina Schweinsberg McCaskey seated on the left, and her mother, Philippina Jung Schweinsberg, on the right. That's Minnie (Wilhelmina) McCaskey Swick standing and holding baby Gladys Swick.

I grew up with an enlargement of that picture on my mother's dressing table, and I always wondered why they were all wearing black on what seemed to be a happy occasion. Now I understand. Poor Great-Grandmother Phillippina must have spend most of her adult life in mourning garments.

Posted by Carolyn Schriber at 7:00 AM