Uncle James and the Scourge of Diphtheria

As is true of many men, I suspect, my grandfather desperately wanted a son to carry on the family name. After Caroline bore him six daughters in a row, he had about given up hope. But on July 5, 1893, she gave birth to a little boy, whom they named after Joseph's oldest brother James, who was killed in the Civil War.

All was well until shortly before James's second birthday, when he became ill.  He had only a cough and a low-grade fever at first, but then began to refuse food, choking if he tried to swallow. The glands in his neck began to swell, and the little cough became a crouping one. Caroline did her best to nurse him, but she was also three months pregnant and suffering her usual morning sickness that lasted all day.  When his skin took on a bluish pallor, they called in the local doctor. He took one look, pried open the little boy's mouth, and pronounced him to be suffering from the dreaded diphtheria. A grayish, leathery membrane had grown in his throat, shutting off most of his air supply. The doctor simply shook his head. The child had only a 50/50 chance of survival, and there was no known cure. 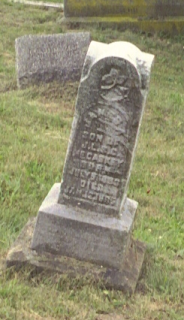 Caroline tried at first to suck out the membrane, as she had seen her own mother do, but it was firmly attached. A neighbor mentioned that her husband had seen doctors cut into the windpipe to admit air -- what we would call a tracheotomy today -- but if the operation failed, it would mean certain death. Joseph would not allow it. Similar attempts to poke a hole through the fibrous membrane itself also failed. It had grown too thick and had firmly attached itself.  Still the child lingered.  In the second week he began to suffer a pounding heart rate, and the muscles of his eyes became paralyzed.

Little James McCaskey died on June 12th, 1895. It was in that year that French doctors began to use diphtheria vaccinations and antitoxins to prevent or treat the disease, but the discovery came too late. Two more daughters joined the McCaskey family -- Florence in December of that year and Margaret in 1898 -- but there was never another son.
Posted by Carolyn Schriber at 6:30 AM