Charleston Society in the Years before the Civil War

Most of what I know of antebellum Charleston comes from one of two sources. One of those is Dr. Nicholas Butler, historian at the Charleston County Public Library and creator of "The Charleston Time Machine," an ongoing blog in which he tells fascinating stories of tidbits he has researched through the library. Nic has been my go-to source of details since around 2002, when he worked in the archives of the South Carolina Historical Society and I was a wide-eyed northern researching probing the details of my great-uncle's Civil War experiences. I read his columns faithfully and have used many of his items in my books. I have him to thank, for example, for the explanation of a "feme sole," which plays such an important role in Henrietta's Journal.

For a broader perspective, I most often turn to an authoritarian work, The Politics of Taste in Antebellum Charleston, by Maurie D . McInnis. The book's description on Amazon has this to say about it:


"At the close of the American Revolution, Charleston, South Carolina, was the wealthiest city in the new nation, with the highest per-capita wealth among whites and the largest number of enslaved residents. Maurie D. McInnis explores the social, political, and material culture of the city to learn how--and at what human cost--Charleston came to be regarded as one of the most refined cities in antebellum America.

"While other cities embraced a culture of democracy and egalitarianism, wealthy Charlestonians cherished English notions of aristocracy and refinement, defending slavery as a social good and encouraging the growth of southern nationalism. Members of the city's merchant-planter class held tight to the belief that the clothes they wore, the manners they adopted, and the ways they designed house lots and laid out city streets helped secure their place in social hierarchies of class and race. This pursuit of refinement, McInnis demonstrates, was bound up with their determined efforts to control the city's African American majority. She then examines slave dress, mobility, work spaces, and leisure activities to understand how Charleston slaves negotiated their lives among the whites they served. "


To see how much Charleston has changed in two hundred years -- and how little -- one need look no further than the modern picture that serves as wallpaper on this blog and the painting on the cover of McInnis's book. 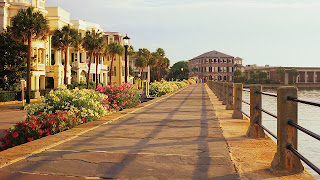 Posted by Carolyn Schriber at 12:30 PM