Why I Watched the Super Bowl 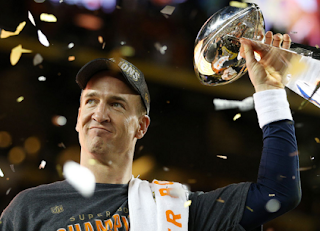 I watched most of the Super Bowl last night – with a break for Downton Abbey, of course. I don’t usually watch sports any more because I no longer have to. That’s one of the very few advantages of living alone.  It’s been a long time since I watched football, and even longer  if you want to talk baseball or basketball or hockey. Oh, I admit to having a weakness for ice skating and gymnastics now and then, especially during Olympic years, but as far as sitting down and watching a game goes, I’d much rather be reading a book.

Still, last night was special, somehow, even if I’m growing more and more opposed to sports that expose their athletes to life-threatening long-term illnesses.  I’ve long admired Peyton Manning for his kindness, his open-armed  interest in others, and his dedication to getting a good education along with a football career. So I  was hoping to see him win this last game and then retire before someone knocked him silly.  I wasn’t disappointed, even if he wasn’t at the top of his form. I cheered out loud when the Broncos won, scaring the cats into racing through the house to see what was on fire.

The game also brought back some bittersweet memories of the years in the eighties, when we lived outside of Denver and followed every Broncos game. The quarterback was John Elway, and I also considered him a good role model for my teenaged son. So we watched as a family, and we faithfully did what we could to support the team’s efforts – usually by eating blue corn chips and drinking Orange Crush during the games. It didn’t work in 86, 87, or 89, but my son learned some good lessons about sportsmanship along the way. He was all grown up and married by the time the team won the Super Bowl in 1997, Elway’s last game, but we still got together to cheer and scoured our new southern home town for some Orange Crush.

So last night reminded me of those good times.  John Elway was watching the game from the sidelines, looking old, and making me feel even older!  There were some awful examples of unsportsmanlike conduct during the game, and the behavior of some of the losing team – sitting on the bench sobbing over the loss or walking out of an interview session --  was a lesson in how NOT to behave. Still, Manning was as much the gentleman as he has always been, and I hoped there were some teenaged boys around somewhere  who were learning about the importance of good sportsmanship.
Posted by Carolyn Schriber at 8:14 AM