OK, anyone who knows me realizes that I am not a dog person. My life is filled with cats. I post cute cat photos. My calendars all have cat pictures on them.  I don't hate dogs, but I'd rather look at them from afar than have to get up and personal with one. Mostly that's because I was never around dogs as a child, and my mother always seemed to worry about a dog biting me. And when that actually happened (when I was nearly 40), I learned the hard way that she was right -- dog bites are not funny. But that's another story.

What's making me laugh at myself today is that I have fallen in love with a German Shepherd! Once a year I indulge in watching two nights of the Westminster  Kennel Club Dog Show, mostly because I get an easy refresher course on dog breeds so that I know what my doggy friends are talking about. And once in a while I find a favorite dog. I love to watch the little beagles as they play and prance around, laughing in the face of dog show decorum. I can be tempted to reach out and pet one of those fuzzy white fur balls that look more like stuffed animals than anything with actual legs and tails and teeth and ears.

Yesterday, over on my publishing imprint website, I posted an article about the official dog of South Carolina, the Boykin Spaniel. And tonight, when the judging gets around to the Sporting Group, I'll be looking for that mahogany brown, curly-haired water dog and cheering him on, although I know the breed doesn't stand a chance of winning against all those royal favorites and appealing labs.

But last night, in the middle of watching the Herding Group, there was a special dog who made me gasp. This year's entry for the German Shepherd breed is 4-year-old Rumor, who already has 101 "Best in Show" ribbons to his credit, but none so important as the one that will be handed out tonight. 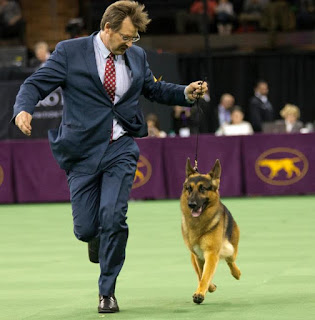 Rumor is incredibly gorgeous, but he's also a pro. He submitted to the judge's pokings and proddings with a dignity that would become a head of state. He was impervious to the crowd's cheers, although he was clearly their favorite, too. He went through all of his paces flawlessly, and then, at last, when he had been singled out as one of the small group of finalists, he turned loose.

As his handler urged him to run, he became wholly himself, flying around that ring in sheer joy, reminding me of nothing so much as a drop of mercury in a test tube, a flowing golden streak, seeming not even to touch the ground. Then his circuit was complete, and he came to a standstill before once again walking back to his position in line.  I could imagine his thoughts: "There! That's who I really am! Superdog!"

And so he was. He won his group, of course, and indulged in just a couple of moments of exuberant prancings worthy of my favorite beagle. Then he wore his "crown" with regal dignity. I cannot imagine a scenario in which he will not win "Best in Show" tonight. Rumor stands head and shoulders above his competitors. 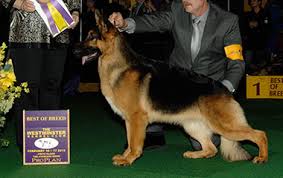 Posted by Carolyn Schriber at 9:48 AM