The Legends behind Valentine's Day

Was there a real St. Valentine?  Historians can argue about the details, but the Roman Catholic Church provides an official view: 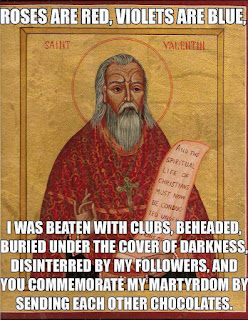 "Valentine was a holy priest in Rome, who, with St. Marius and his family, assisted the martyrs in the persecution under Claudius II. He was apprehended, and sent by the emperor to the prefect of Rome, who, on finding all his promises to make him renounce his faith ineffectual, commanded him to be beaten with clubs, and afterwards, to be beheaded, which was executed on February 14, about the year 270.
Additional evidence that Valentine was a real person: archaeologists have unearthed a Roman catacomb and an ancient church dedicated to Saint Valentine. Alongside a woodcut portrait of him, text states that Valentinus was a Roman priest martyred during the reign of Claudius the Goth [Claudius II]. Since he was caught marrying Christian couples and aiding any Christians who were being persecuted under Emperor Claudius in Rome [when helping them was considered a crime], Valentinus was arrested and imprisoned. Claudius took a liking to this prisoner -- until Valentinus made a strategic error: he tried to convert the Emperor -- whereupon this priest was condemned to death. He was beaten with clubs and stoned; when that didn't do it, he was beheaded outside the Flaminian Gate [circa 269].
Saints are not supposed to rest in peace; they're expected to keep busy: to perform miracles, to intercede. Being in jail or dead is no excuse for non-performance of the supernatural. One legend says, while awaiting his execution, Valentinus restored the sight of his jailer's blind daughter. Another legend says, on the eve of his death, he penned a farewell note to the jailer's daughter, signing it, "From your Valentine."
He is the Patron Saint of affianced couples, bee keepers, engaged couples, epilepsy, fainting, greetings, happy marriages, love, lovers, plague, travellers, young people. He is represented in pictures with birds and roses." [http://www.catholic.org/saints/saint.php?saint_id=159]
Another version says that the day of his execution just happened to be February 14, the Roman festival of Lupercalia, in which Roman girls drew names out of a box to see who their  lover would be in the coming year.  So the two ideas--lovers and friendly farewell notes—gradually grew into our current celebration of hearts and flowers.
The next time someone asks you to "Be My Valentine," however, you might want to remember what happened to the first Valentine!

And one further warning.  All of the following have been known to cause migraine headaches: roses, chocolates, wine, aged cheese, perfume, candlelight, and movies. Play it safe this year, gentleman. Buy your beloved a book!
Posted by Carolyn Schriber at 6:38 AM