Clearly, I Don't Know Much about Dogs 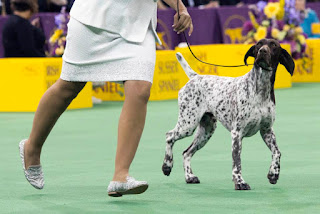 So congratulations to CJ, the German Short-Hair Pointer, for his "Best in show" title at last night's Westminster Kennel Club Dog Show.  He's a beautiful dog, even if across the TV screen I didn't spot his "Old Soul"sparkle. He was really cute on "Good Morning America" this morning, so all is forgiven.

Here are a few things I've learned about him.  His favorite foods are chicken and carrots. He's a regular house dog who lives with six other dogs, including two rescues and at cat named "Tootsie" whom he loves to lick. He loves to play fetch with a ball, has only been competing in shows for about six months, and is allowed to jump on the bed.  Sounds like a good life to me!

I'm just glad I don't have to judge these things for real. How you can decide among animals as different as a Borzoi  (think elegant but bored ballerina) and a Bulldog (lumbering doughnut-craving Winston Churchill), a German Shepherd (sleekSuper-Dog) and a shih tzu (so much hair you can't find the dog)? I enjoyed every minute of it, so thanks to all of them for a great show.

Posted by Carolyn Schriber at 11:40 AM