Book Club Refreshments for Readers of "The Road to Frogmore" 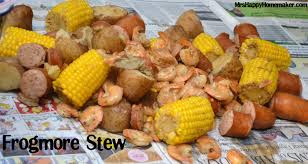 For each of my books, I eventually create a Pinterest board for use by book clubs. Each board offers a bit of background to the story, a quick author sketch, discussion questions, and a bibliography of related readings. My favorite part, however, is always a suggested menu, based on meals eaten in the book itself.

Laura and her housemates were on limited rations.  The Army provided them with small allowances of commodities such as flour and sugar, but for the most part, they relied on the same sources of food as did the slaves.  They had their own gardens for vegetables, and a few chickens to provide eggs (or meat, if the chicken quit laying eggs.).  Most of their protein came from seafood or the white fish that could be pulled from the freshwater streams in the area. They had no access to alcohol, so this luncheon will be one fit for teetotalers.
Laura’s diary describes some of their meals in detail. At almost every meal they ate turtle soup, so that might be a natural choice, if it were not for the fact that now, most turtles in the Carolinas are endangered species, and trying to find recipes for turtle soup is likely to yield an internet lecture on why the turtles may not be eaten. I’ve included a recipe, but I really don’t expect anyone to serve it.

The slaves the missionaries had come to help continued to work for them as cooks and fishermen, so Laura’s table served Gullah recipes, which fall into two categories.  One set starts with seasonings of tomatoes, onions, and peppers, along with a bit of fatback or bacon, adds some sort of seafood, and then serves the resulting dish over grits.  The recipe here is for the iconic shrimp and grits of South Carolina.
The other variation starts with the same seasonings to create a type of gumbo, although this is not the gumbo we’ve come to know from New Orleans.  The Gullah variety uses okra as the thickener instead of a rich dark roux and is served over rice, which continued to be grown on the plantations of the Low Country.  Either dish, accompanied by some fried green tomatoes, would provide a satisfactory and authentic Gullah lunch.
Another possibility is to rely on that perennial favorite, Frogmore Stew, a tradition that also began with the slaves of St. Helena Island. What does one do when no one has enough to provide supper?  You get together with the neighbors, and each cook throws into the pot whatever she has -- a chicken, some sausage, a few potatoes, an onion, some cobs of corn, some shrimp, or crabs, or oysters, or fish.  It all boils together, and then is poured out onto a table, where the diners gather around and help themselves.
If the group does not want to eat a sit-down meal, they might snack on boiled peanuts and soft ginger cookies. Peanuts were a staple of slave diets. The cookies remind the reader of the ginger cakes that Lottie Forten baked for her friend, Dr. Seth Rogers, surgeon of the famous 54th Massachusetts.
If this menu were completely legitimate, the only beverage would be molasses water, which the slaves loved and the missionaries drank grudgingly.  If you want to get an idea of what it tasted like, think of a glass of coke poured over ice and allowed to sit for several days, until the ice all melts and the soda goes completely flat. A pitcher of lemonade might be better to bring this meal to a close. 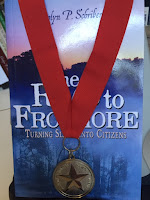 The Road to Frogmore,  a biographical novel by Carolyn P. Schriber, was published in 2012. In 2013, it won a Silver Medal from The Military Writers Society of America. A digital version will be available for free in the Kindle Store from Monday, April 25, 2016, through Wednesday, April 27, 2016. Don’t miss this chance to read the story of a remarkable woman.

Posted by Carolyn Schriber at 7:00 AM