Inside America’s Auschwitz: A new museum offers a rebuke — and an antidote — to our sanitized history of slavery

This article has already been spread over much of the internet, but it deserves the widest possible  dissemination. It is reproduced here with thanks to smithsonian.com. 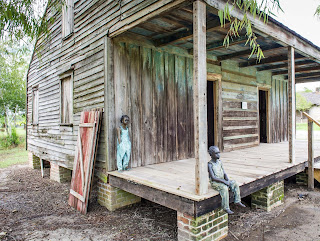 At first glance, the “Wall of Honor” at Louisiana’s Whitney Plantation slavery museum — a series of granite stones engraved with the names of hundreds of slaves who lived, worked and died there — evokes any number of Holocaust memorials. But as the future mayor of New Orleans noted at the museum’s 2008 opening, this site is different; this is America’s Auschwitz.

“Go on in,” Mitch Landrieu told the crowd, according to the New York Times. “You have to go inside. When you walk in that space, you can’t deny what happened to these people. You can feel it, touch it, smell it.”

The former indigo, sugar and cotton operation, which finally opened to the public after years of careful restoration in December 2014 as the country’s first slave museum, is a modern avatar of injustice. Nestled off the historic River Road that runs alongside the slow, lazy crook of the Mississippi, the estate was built in the late 1700s by entrepreneur Jean Jacques Haydel upon land purchased by his German-immigrant father, Ambroise. It was the younger Haydel who expanded the estate and established the plantation as a key player in Louisiana’s sugar trade, transitioning the main crop away from the less-profitable indigo markets. A couple of years after the Civil War, a Northerner by the name of Bradish Johnson bought the property and named it after his grandson Harry Whitney.

The restored property, a mix of original structures and replicas, includes an overseer’s home, replica slave cabins — scenes from Django Unchained were filmed right next door — and a blacksmith’s shop, among other buildings. Even when nearly deserted, it feels like the place could spring to life at any moment as the slaves return from the adjacent sugar cane fields. The 15-year restoration effort was backed by John Cummings, the local lawyer and real estate mogul who purchased the land from a petrochemical company and invested $8 million of his own money into restoring the property and developing the museum — reportedly out of his own sense of white guilt over the horrors of slavery, according to the Times. “When you leave here,” he told the New Orleans Advocate, “you’re not going to be the same person who came in.”

That is the key to how the Whitney Plantation is unlocking the grim story of America’s greatest shame, a tale too often masked by a genteel preservationist approach to plantation history that has pasted romantic Gone With The Wind wallpaper over slavery’s appalling reality.

“Often, plantation exhibits were established for those who lived through the Civil Rights era and yearned for a less complicated time,” says Ashley Rogers, director of museum operations. “And that’s an easy thing to accomplish when you have a ‘chandelier’ tour. Where the previous focus at plantations has been on the house and the culture of Southern gentility, things are changing.”

And the Whitney is taking the lead. “We care about the Big House, but it’s not about that,” says Rogers. “This is a slavery tour.” The Whitney Plantation is explicitly not a rosy exercise in Southern nostalgia. Part reminder of the scars of institutional bondage, part mausoleum for dozens of enslaved people who worked (and died) in the sugar fields of the Haydels’ and those across the South, the 250-acre plantation serves as a monument to the terror of slavery, and a rebuke of the structural racism that persists today. In the same way countries like Germany and South Africa have built an entire pedagogy of reconciliation as they retroactively come to grips with their historical demons, the Whitney Plantation is an attempt to force the United States to grapple with the long shadow of American racism.

This focus on the slave experience is deeply enmeshed in every moment of the Whitney’s tour. Visitors are initially gathered outside the historic Anti-Yoke Baptist Church built in 1870 and the humanity of the slaves is immediately driven home. Inside the church, attendees are surrounded by clay sculptures of the slave children who lived and, in short order for many, died on the grounds of the plantation, a ghostly monument to their lost childhoods. Withered and raw, the sculpted children are the most visceral reminder of those who suffered — and whose stories make up the heart of the tour. Tourists are given a physical souvenir, a pass on a lanyard with a profile of an enslaved resident of the Whitney. Mine came emblazoned with a famous quote from John Little, a fugitive slave who escaped his bondage in 1855: "Tisn't he who has stood and looked on, that can tell you what slavery is — 'tis he who has endured."

The Federal Writer’s Project (FWP), established by President Franklin Roosevelt as part of his Depression-era Works Progress Administration, is the reason slave narratives like Little’s exist at all, and only because of a historical stroke of luck. Some 6,600 writer and editors were deployed across the country as part of the FWP, including a unit formed in the spring of 1939 to record and preserve the oral histories of America’s last generations of slaves.

With the somber tone established, a visitor’s horror builds as the tour passes the Wall of Honor, the chirping of birds and the distant hum of machinery in the still-active fields providing an incongruous soundtrack. The slaves emblazoned on the monuments mostly lack surnames; a full name for disposable property must have seemed a waste of effort. The walls are dotted with Bobs and Josephs, Amelias and Marys.

But interspersed throughout is something more telling of the slave experience than a last name: testimonials to the brutality doled out by plantation overseers. “They took and gave him 100 lashes with the cat of ninety-nine tails,” wrote Dora Franks of her uncle Alf, whose crime was a romantic rendezvous off the property one night. “His back was somethin awful, but they put him in the field to work while the blood was still runnin’.” Another story ends with a single terrifying phrase: “Dey buried him alive!”

As the tour passes massive bronze sugar kettles, the slave quarters and the kitchens, the narrative of persecution is a relentless wave of nauseating statistics. Some 2,200 children died enslaved in the home parish of the plantation between 1820 and 1860; infant mortality was grotesquely common. Some 100 slaves were forced to work around the clock during the short autumn harvest season to keep the massive sugar kettles going. Slaves laboring in the dark routinely sustained third-degree burns and lost limbs, although this rarely ended their servitude.


Amputations were frequent; punishment by the whip common. A trip to the Big House — at one time called “one of the most interesting in the entire South” by the Department of the Interior — reveals incredible architecture and design, including rare murals by Italian artist Domenico Canova. But the elegant front portico looks out toward the river, turning its back on the daily parade of torture and terror just steps away from the backdoor.

The Whitney museum has structured its entire pedagogy around the guided experience. It concludes with a reminder that the racial injustices of the 19th century didn’t simply disappear with the Emancipation Proclamation. The guide described the excitement curators felt when they first took possession of the Big House and found stacks of well-preserved records of the post-Civil War system, a low-wage cousin of the exploitative sharecropping system, of in which the cost of doing business always mysteriously remained one step ahead of the farmers’ revenues.

According to Rogers, this new approach to a long-romanticized aspect of Southern history is having an impact. The Whitney Plantation saw 34,000 visitors in its first year — nearly double the expected turnout, if still lower than visitation figures for other, more established plantations — and the museum has discovered a growing audience among schools and, especially, African-American tourists, for unsanitized history. And Rogers suspects they are having an impact outside the Whitney’s own audience. “Other museums are changing how they do things,” says Rogers. “Plantations now mentions slaves and slavery more explicitly in their listings.”

Louisiana is the perfect home for the Whitney’s unique project. The state was home to dozens of plantations during the heyday of slavery in the antebellum South, with 146 listed in the National Registry of Historic places. The Evergreen Plantation, the Whitney’s neighbor in Wallace, remains one of the most intact examples of a traditional plantation; the Destrehan Plantation played home to a tribunal and executions following the largest slave uprising in American history, the 1811 German Coast Uprising.

The Pelican State wasn’t ground zero for America’s slave trade, but the plantation system has became an integral part of the state’s cultural heritage; some 1.9 million tourists visited historic sites in 2015, including the popular Rosedown Plantation in St. Francisville, generating a whopping $1.2 million in revenue. 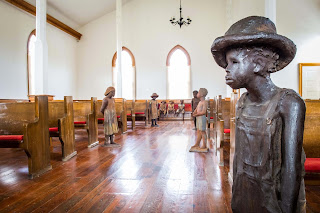 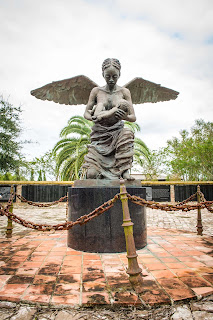 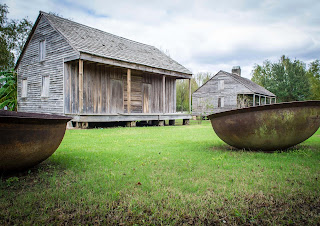 Posted by Carolyn Schriber at 8:26 AM