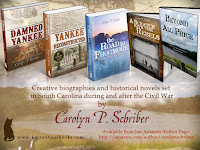 Several years ago people were talking about the "butterfly effect"--the idea that a single butterfly in South America might flutter its wings and put into motion a series of events that would ultimately change the world. It has become a truism, so obvious that we now often forget to look back at the small events from long ago that changed our own lives.

I was reminded of such a butterfly moment today. April 12, 2016, is the 177th birthday of a little boy named James McCaskey. James was born on a hardscrabble farm in southwest Pennsylvania, the first child of John and Jane McCaskey, Scotch-Irish immigrants to America. The family grew to include six more children, the youngest of whom was Joseph McCaskey, my maternal grandfather. James and his siblings attended a one-room schoolhouse, where they learned a few fundamental skills such as reading and writing, but James, at least, never mastered the art of spelling.

In August 1861, he left the farm to enlist in the Union Army, and, with his neighbors in the 100th Pennsylvania Volunteer Regiment, set out  to invade coastal South Carolina. During his first real battle, just ten months later, at a little earthwork on the middle of a swamp on James Island, he died. A cannon ball blew off both of his legs and he quickly bled to death. His remains were shoveled into a mass grave with the bodies of almost 500 others right there in front of the earthworks, where they remain to this day. The only things he left behind were six badly spelled letters to his family and the still tear-stained letter from his commander, telling of his death.

Those letters passed from his parents to my grandparents, and from them into the hands of their youngest daughter, my mother, who tossed them into an old trunk in the attic, where they remained until I found them about 1977.

Eventually those letters formed the basis of my first Civil War book, A Scratch with the Rebels, which tells the story of James's regiment and the Battle of Secessionville that took his life. Beyond All Price is the story of the  nurse who accompanied the 100th Pennsylvania Regiment to South Carolina. The Road to Frogmore expands the story to tell of the meeting of the Union Army and the slaves abandoned by their Confederate owners. Damned Yankee is a historical novel based on the real family who owned one of the houses where the 100th Pennsylvania made their headquarters. And Yankee Reconstructed carries the story further into the era of Reconstruction.

There the books are at the top of this page. Who could have known on that April morning in 1839 that the life of that squalling newborn baby would spawn an outpouring of  slightly over a half a million words that readers would still be enjoying in 2016? Or that another baby born almost exactly 100 years later into a future generation of the same family would grow up to become a writer fascinated by the stories of South Carolina in the Civil War?
Posted by Carolyn Schriber at 1:11 PM