What Do You Know about the Twelfth Century? 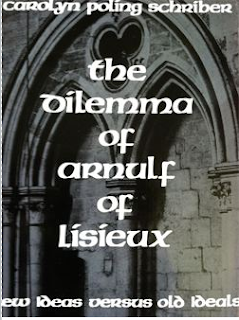 You may think you know nothing at all about what happened nearly nine hundred years ago, but I'm willing to bet you've heard about some of the people and events that filled Bishop Arnulf's life. Among them are Second Crusade, the development of Gothic architecture, and the much discussed Becket Controversy.  Let me remind you of a few details

The Second Crusade (1147 to 1149) was urged upon the rulers of France and Germany by the Pope to recapture the city of Edessa and keep the travel routes open so that Christians might make pilgrimages to the Holy Land. The leaders of the Crusade were Louis VII of France and Conrad III of Germany. Oddly, Louis was accompanied by his wife, Eleanor of Aquitaine, whose name many of you will remember. Despite the fact that clergy were supposed to be total pacifists, many bishops, including Arnulf, went along with the Crusaders, ostensibly to care for their souls. But it was also a great adventure and carried with it the possibility of gaining personal wealth, the favor of the King, and a nice little collection of holy relics.  Arnulf himself did not enjoy the experience. He grew exasperated with the incompetence of the young Louis VII and the dalliances of his wife.  Arnulf abandoned the Crusade and returned home ahead of the rest of the French army.

Gothic architecture blossomed during the High Middle Ages. The first French church built in the Gothic style was the Abbey Church of Saint Denis, built by Abbot Suger and dedicated in the presence of the French king (and Arnulf) in 1144.  The Gothic style was characterized by soaring walls, supported by flying buttresses, pointed arches and elaborately vaulted ceilings, a light and airy atmosphere created by using thin walls penetrated by many stained glass windows, and ornate decorations, including water downspouts that took the form of grotesque gargoyles.

Bishop Arnulf envied the church and tried to copy its style when he rebuilt the cathedral at Lisieux. However, he was also a stodgy old conservative, so his new church often displayed the appearance of Gothic while keeping the thick 8-foot walls of the previous Romanesque style.  Interestingly, Arnulf feared thin walls would collapse. Instead, the old style he preferred has proven too heavy for the underlying ground of his cathedral, and there are places where the walls have to be continually shored up. The real Gothic churches have no such problems.

And of courses, there's the Becket controversy.  If you're old enough, you will remember  the story being told in movies like "The Lion in Winter" and "Becket" with all-star casts and academy award winning cinematography. Henry II of England, and Thomas Becket, his Archbishop of Canterbury, were once great friends who split over the issue of the powers of church and state--a controversy which still rages in much of the world today. In the long years during which the two men jockeyed for the upper hand, Arnulf of Lisieux was once again on the scene. He played off both sides, unwilling to anger either man and hoping to somehow be the peacemaker who saved the day. But in the process, he betrayed the trust of both of them. And when Becket was finally murdered at the altar of his cathedral in 1170, Arnulf found that he had lost both the trust of the monarchy and the respect of the clergy.
Posted by Carolyn Schriber at 7:00 AM