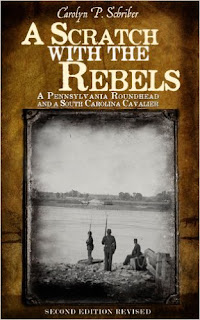 On a muddy South Carolina battlefield, a sergeant sat propped up against a hedge and tried to focus on the spot where he thought his leg should be. There was nothing – only the tattered remains of his trousers and a pool of blood that grew ever larger. The whistle of artillery shells had stopped, and the sudden quiet was as jarring as the previous battle noises had been. Shock had deadened the pain, so that all he felt was exhaustion as he closed his eyes. Sgt. James McCaskey had fought and lost his only battle.
"From behind a hedge on that battlefield, a young private picked his way through the bodies, following orders to gather up the abandoned weapons and tend to the wounded. Pvt. Augustine T. Smythe was stunned by the mayhem that met his eyes, particularly the sight of a soldier who lay with his leg shot entirely away. He whispered a silent prayer, as was fitting for the son of a Presbyterian minister, that he would never again have to witness such horrors.
"The Battle of Secessionville, fought out in the early hours of June 16, 1862, on James Island, South Carolina, brought these two young men together for a single moment. But the events of the Civil War had been drawing them together for almost a year. James and Gus were approximately the same age. Both were first-generation Americans, the sons of Scotch-Irish immigrants to the United States. Both stood firm in their Presbyterian faith, and both believed passionately in the cause of their countries. Both wanted to enlist from the day the first shot was fired at Fort Sumter; both had to spend months persuading their parents to allow them to join the army. They set out for their first battle on the same day – November 7, 1861-- and both missed the action by arriving too late. Both chafed at enforced inaction and longed to get into a real battle. Each of their Scotch-Irish mothers might have warned her son to be careful for what he wished.
They were just two soldiers, alike in many ways but different in the one trait that mattered on that battlefield. One was North; the other, South. Sgt. James McCaskey belonged to the 100th Pennsylvania Regiment, known to their comrades as “The Roundheads.” They came from the farms of western Pennsylvania, determined to defend for all men the Calvinist principles they most valued – self-reliance, industriousness, and liberty. Gus Smythe served in the Washington Light Infantry, part of the 24th South Carolina Volunteers. He was a college student from a well-to-do Charleston family and an ardent supporter of the Confederate right to secede from a political union that did not serve the needs of its people. This is the story of how they came to their opposing positions, and how the Battle of Secessionville altered not only their own lives, but the lives of all those who shared their experiences.
Get your free digital copy of A Scratch with the Rebels here starting Sunday, March 27th at midnight.
And order the full version of the book,  complete with endnotes, maps, and illustrations, here for only $5.00 plus shipping. (That's an 80% price reduction.)

Posted by Carolyn Schriber at 9:42 AM