Truth Is Still Stranger than Fiction

I may now be a writer of fiction, but my first love will always be history, and the stories than lie beneath the history.  Sometimes the truth is so strange that you cannot believe it happened. Sometimes you know you'll never be able to tell this story because no one else would believe it. And sometimes history resembles fiction but the real story outstrips the fictional one. 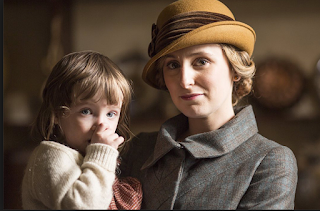 Such is the case with a story I learned about this past week.  But to get you in the mood, I'll start by reminding you of a recent plot line from the soon to be defunct "Downton Abbey." Sister Edith had an "illegitimate" child by a man she fully intended to marry. But before they could hold their wedding, he was called to Europe on business. Somewhere in Germany he disappeared, never to be heard from again.  Edith, now realizing she is pregnant, must find a way to hide her condition. She moves to London and enlists the help of a sympathetic relative. After the child is born, Edith cannot bring herself to lose touch with her. She manages somehow to arrange for a tenant family to adopt the little girl, an arrangement that allows her to watch the child from a distance.

But of course watching from a distance is eventually not enough. Edith makes excuses to visit the family and have contact with the child. Then she determines to confess her motherhood to her family (with the exception of her sister Mary), and begs to have them bring the child into the family estate as a "ward." No one ever suggests just admitting the truth. The adoptive mother, having now lost her child, grieves for her and at one point lures her away.  Edith and her father eventually find the child and snatch her back, buying off the adoptive father and arranging to send the adoptive family far away where they can never again see the child. For the modern viewer, two things stand out: society's complete inability to accept a child born out of wedlock and the total failure of everyone to consider what is happening to the child.

In the diary I've been reading, the writer is such a child. Born to a  young English girl and a prominent Canadian politician, she cannot be acknowledged by her father. So the mother takes the child back to England, where, I can only surmise, she can make up a story about a lost husband over in America.  But a member of the father's family cannot accept the loss of this child. She follows the mother back to England, hunts her down, finds the child and abducts her. She carries her off  to Europe, where she passes the child off as her youngest daughter.

The child is less than two at the time of the abduction.  Her "sisters" only remember that she was already walking when she came to live with them and that she cried all the time for "Mummy." She grows up never knowing who she is, nor does the family ever reveal her true identity. She only knows that she does not look like her "sisters," that her mother treats her differently, and that there is no record of her birth to tell her who she is.

In the diary, she mentions it only once. She writes: "I have felt deeply about keeping anyone in ignorance for my not owning a relation or a Madre [mother]} in this world and no likelihood of ever knowing anything, as but one person in this world knows anything of me. How I hate to be such a deceiver, creeping into families and getting friends by false pretenses." She wishes she could confess, but then realizes that she would then have to go far away and start life over as someone else. It's a stunning admission, clearing up much of her relationship with the woman she now calls mother, and telling us even more about the mindsets of the late 19th century.
Posted by Carolyn Schriber at 2:41 PM