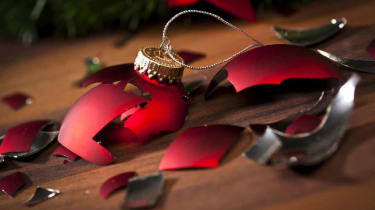 I first wrote the post below six years ago, but it still resonates within me more strongly than anything I have written since. Evidently it resonates with readers, too, since I've been getting messages asking for a re-run. So, for those readers, and for those whose friendships I have made in the past year, here's what's in my heart this Christmas  season.

This has been a difficult month for me. I expected that. It's been almost six years since Floyd died, and between Thanksgiving and January come too many special occasions to count -- memories of trips taken and planned, his birthday, our wedding anniversary, holidays, the "heart attack" day, the hospital stays, the hopes built up, and the hopes dashed and trampled into dust. I'm trying to survive each day, one at a time. Christmas is about over, although there's not much here to remind me except for the wreath on the door and a few fake candles on the mantle. Still, I awoke this morning with a dozen memories struggling for recognition -- each one from a "Christmas Without . . ."

1958 -- the first Christmas after my father died. I'm home from college; my mother is barely speaking to me because I dared to pay my own way to go back to my campus dorm instead of staying home to mourn with her, and the empty, undecorated house is a stark reminder that she feels she has been left with nothing.

1962 -- Christmas far from home. I'm married now, and my new Air Force Second Lieutenant husband has just been assigned to his first posting, a radar installation in Moses Lake, Washington. We are living in a single room in the BOQ on base, waiting for housing to open up. No tree, no gifts, no family, not even a cat.

1963-- Housing  taken care of,  I have a teaching job, but Floyd has been whisked off to a remote site  in Alaska for a year, leaving me alone here in the middle of the desert.  My mother is unsympathetic. "You chose to get married," she writes.

1969 -- I'm in Panama City, Florida; Floyd is in Pleiku, Vietnam. My mother tries to be more sympathetic since its wartime, so she has arrived to celebrate the holidays with me. I've put up an artificial tree and tied Christmas bows around the cats' necks, but we spend most of the time watching TV reruns while I wait for the phone to ring and pray it doesn't..

1977 -- The first Christmas since my mother died -- still trying to explain to my six-year-old why Grandma Peggy is not around anymore (and why it matters that we keep remembering her.)

1980 -- I'm in Colorado Springs; Floyd is in King Salmon, Alaska. He's the base commander now, and I'm finishing up a master's degree, but the sense of "Christmas without . . ." is no less sharp. I'm trying to assemble a cat climbing post that uses a tension pole to hold it upright. Next door is a shiny new bike waiting for me to assemble without help, once Doug is asleep.

1982 -- The first Christmas without Grandpa Schriber, who died on my birthday last spring. We go back to Cleveland for Christmas, but my mother-in-law is in no mood to celebrate anything. (Now I know why.)

1985 -- The first Christmas without Grandma Schriber. Doug asks, "We don't have to go back there again, do we?" and is relieved to be told that there is no longer any "there" to be returned to. I feel oddly bereft -- Floyd and I both orphans now, both only children, so adrift without family.

2000 -- The first Christmas since Doug's shocking death from cancer. We can't bear to be home, so we fly to London for the holidays. We're in a cold hotel room, huddled around a little space heater,  a spindly poinsettia on the end table and a packet of mince pies for our Christmas. But outside there are the makings of beautiful memories: carolers in Trafalgar Square, "The Messiah" at St. Martin's in the Fields, midnight services on Christmas Eve in Westminster Abbey, and Christmas snow falling on Old Ben and the Houses of Parliament.

2015  -- And now Christmas without Floyd. The first of however many I have left, and I pause to wonder what the last half century has taught me. What I see this morning, as I look backward, is that I have few memories of the carefree years, the holidays full of decorations and cookies and fruitcakes, Christmas cards and Secret Santa packages, parties and turkey dinners. They were happy times, I know, but I let them pass without fully savoring the moments. And those memories fade from lack of notice. It's the "Christmases Without . . ." that fill my mind and my heart.

2018 -- Another un-Christmasy Christmas. No tree this year because youngest cat tried sampling plastic pine needles and spend three days being very ill.  Since I've already lost two other cats this year--RIP, Nutmeg and Miz-Miz--I won't risk another such loss right now. I didn't get any cookies baked this year, either, thanks to an oven fire that put it out of commission for almost three weeks. No antlers on the car. I've been waylaid with a bad back and have hardly left the garage. I do have a hunk of fruitcake, however, and some chicken and dressing to remind me of happier times.

2020 — Who would have guessed that this would be the Christmas Without . . . Everything? No schoolrooms decorated with paper chains, no midnight candle-lit church services, no Messiah concerts, no theaters, no office parties, no family gatherings, no road trips, no restaurants, no gyms, no sporting events with cheering throngs, no neighborhood caroling, no shopping trips, no hugs. Worst of all are the missing familiar faces; they have become part of the millions lost forever to the ravages of COVID-19.

Pundits remind us to "count our blessings," and I'm totally in favor of that, but it doesn’t go far enough. We also need to stay aware of our losses. The losses . . . the Christmases Without . . . the things we grieve for . . . these may be the most important moments of our lives. There's no hiding from them. They are part of our core. And they teach us an important lesson — that we often fail to appreciate the abundance in our lives until something takes it away. So I'll count my losses once again  and be grateful that I've known them.

Posted by Carolyn Schriber at 12:51 PM