What Is It? And What Do You Do with It? 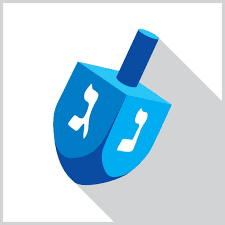 After watching “The Queen’s Gambit” on Netflix, I’ve decided I’ll never understand the game of chess, but Hanukkah offers a simpler way to scratch that competitive itch. Dreidels require only a flat surface (any floor except carpet will do) and a single small piece of wood. A dreidel is a spinning top with four sides, each inscribed with a Hebrew letter that describes your movement. Any number of players can join the game, which may last for only a few seconds or continue throughout the day. The only limitation to the game is that its season lasts for only 8 days and only comes around once a year.

Here’s how you play:

Each player puts one marker into the “pot.” Those markers can be anything that’s handy—pennies, beans, buttons, raisins, paper clips. (I don’t recommend using M&Ms because of the danger that someone may come by and eat the pot!).

Players take turns spinning the dreidel and acting according to which side comes  up.

nun = nothing.  And that’s what you get. It’s the equivalent of losing your turn.

shin = put it in or give it up. You must contribute one marker to the pot.

That’s it. Those are the only rules. What does it have to do with Hanukkah? Well, those four letters can stand for a Hebrew sentence that says: “A great miracle happened there (or here, if you happen to be in Jerusalem!).”

Posted by Carolyn Schriber at 10:34 AM