What's Your Book About, Anyway?

For me, part of the process of creating a novel involves committing to a specific storyline.  I've been mentally testing plot ideas for the better part of the last two months. Now, with just two weeks to go before the start of the July Camp NaNoWriMo writing marathon, I've finally settled upon the major plot elements: a heroine, a goal, a villain to stand in the way, a series of escalating crises, and a climactic denouement. Here's the synopsis. 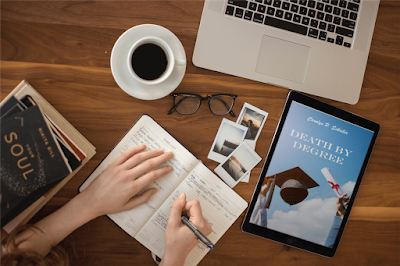 Dr. Sarah Rebeccah Chomsky, accompanied only by her cat Elijah, arrives to assume her duties as Assistant Professor of History at Smoky Mountain State University at Birch Falls. She is excited and optimistic--determined to make a success of her new career. She harbors a romantic view of what a professor's office should look like--a Persian rug, a Tiffany lamp, an organized desk, shelves of wonderful books, and enough plants and tchotchkes to give it a personal touch. She envisions herself as an inspiration to her undergraduate students and a friend and colleague of her graduate students. Along the way, she might not even mind finding the answer to her mother's greatest wish--that Sarah might meet a "Nice Jewish Boy."

But one of those graduate students--Cassandra Jernigan McGehee--has other plans for her. As the youngest member of the graduate student cadre, she is determined to form an alliance with the newest faculty member and take over the department. Cassie's pushy personality soon takes on the characteristics of a stalker as she pursues her friendship with Sarah.

Then strange problems begin to crop up in the department--unwanted gifts, polarizing debates among the faculty and students, hate speech keyed into the car door of faculty members, unexpected illnesses and maladies, family problems, an April Fools prank that goes too far, and an unexplained poisoning.

As the problems increase in their intensity, the local police, represented by a definition-meeting "Nice Jewish Boy," will step in to hunt down the culprit, and Cassie is pushed to escalate her own attacks in response. Sarah's efforts to reach out to Cassie eventually uncover a diagnosis of a serious mental disorder, and the result is a life-threatening final confrontation.

Posted by Carolyn Schriber at 12:33 PM