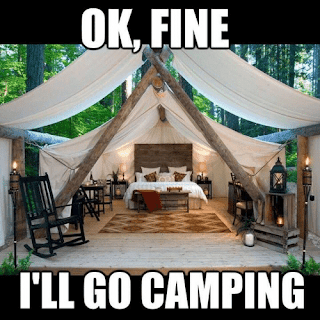 It's summer, and I'm thinking of signing up for camp. No, not like the one in this picture. And not like the grubby, itch-inducing, week of torment I suffered through as a kid, either. Instead, I'm dithering over my annual invitation to sign up for the NaNoWriMo-sponsored July writing camp.  For those of you who have not heard of NaNoWriMo, it's not a fake Indian name, but rather the abbreviated form of "National Novel-Writing Month."

The original NaNo always took place in November, and what a terrible idea that was! November is arguably the worst time of the year to ask writers to put aside their other duties every day and pound out 1667 words of a new novel. Do that, the promoters argued, and by the end of the month, you will have written your novel--all 50,000 words of it. Don't think about it, don't read what you've written, don't go back and correct the typos--just write your heart out. That formula pretty much guarantees that at least half your words will be sheer gibberish. And even if what you have written makes sense, 50,000 words will not give you much of a fleshed-out novel. You'll need at least 25,000 words more, and maybe as many as another 50,000. Now add in the other distractions of November--there's Thanksgiving, Christmas shopping, the first snowfall, football games, and the run-up to final exams week. I've tried to do the November exercise, but I usually fail--spectacularly!

With those truths in mind, the NaNo sponsors came up with a couple of new ideas--do an abbreviated "camp"--one in April, another in July. I'm not a big fan of writing in April either. That's often the month I've just finished publishing my latest book and have sworn off writing for life. But July tempts me. It's too hot to be outside, most friends are off on vacation somewhere, and the tasks of September are still far off. To sweeten the deal, writers can choose their own word-count goals and share their writing problems with a small group of like-minded fellow campers--groups of 20 or so who share a virtual "cabin" and cheer each other on. Silly as it sounds, it works!

So once again, I'm seriously considering joining the effort this year. I started by looking at the picture above. Turns out I already have much of this scenery waiting for me. Somewhere, in another part of the house, there's a big, soft, comfy bed awaiting me. I have the rocking chair (two of them, in fact) to let me ponder and hatch some new ideas. My house sits in a grove of trees --not a forest, by any means, but enough to give me that isolated feeling. I have the soft lighting, the foot-cushioning rug, the desk, and the bottle of wine you can see on the table on the left. The clock is ticking and the candle burning down--both telling me it's time to get back to work.

But it's going to take more than an idyllic setting to jump-start a new novel. In the next few days, I'll be thinking about those requirements. What other preparations do I need? If you're a writer, what props do you need for motivation? Send suggestions, please, and then stay tuned for final decision time. (Note: the "Comments" function is open.)

Posted by Carolyn Schriber at 2:37 PM