My Writing Life as Calendar Pages 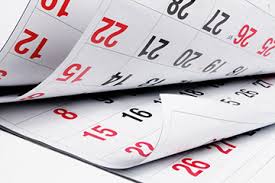 I’m still trying to figure out a new breakdown of the seasons—one that will add some semblance of order to the way I approach writing a new book.  Here’s how I see my life at the moment (as revised from a couple of years ago.)

My new year (at least this year) starts with “Emergence,” during March/April/May. It's a period of new beginnings, of breaking out--triggered, perhaps by the swelling of tree-leaf buds that gives the bare branches a tinge of green. Maybe (as in spring) there's a daffodil poking up through the cold mulch or a single confused flower on my azalea. More importantly for me, there's a stirring of ideas, a shaking off of the past, an eagerness to start something new. During these past three months, I put the finishing touches on “Henrietta’s Legacy, which came out in mid-April, but those were simply details, cosmetic changes. The more important stuff has been going on in my imagination.  I’ve been planning, plotting, drawing story arcs, doing character sketches--all the first steps in creating a new book. (But more of that later.)

Now comes my season of "Implementation"—June /July/August.  Normal people would call it summer. My birthday falls in May, which always gives me a feeling of "OK, another year--here I come!" And then I'm ready to work hard. I've never been much of a summer person. I'm not a swimmer, I hate bugs, and I burn before I tan. So traditional summer will find me indoors, enjoying the air-conditioning, and eagerly pursuing my favorite pastimes of reading, researching, and intensive writing.  By the end of the season, I may be indulging in a Camp NaNoWriMo writing challenge, pounding out the first draft of a new novel.

My third season is "Fruition"—September/October/November--when I set firm deadlines to finish up my current project. I'm one of that weird bunch of people for whom September used to mean the start of the year. We're mostly academics, I suppose, our lives attuned to the start of a school year. There may be a few witches among us--those for whom harvest festivals and Halloween have special significance. And maybe some of us fall into both categories. (No one I know, of course, although a new character may fall into that category!) I still love September, when there's just a touch of crispness to the morning air, when trees start to put on their red and gold show, when gardens no longer need tending, and harvests load us up with delicious and healthy crops. I’m now ready to harvest those ideas that started to form in March and have been growing ever since. My daily planner will include several major goals, most of them involving book publication—editing, re-writing, polishing, and formatting the book I’ve been writing.

And then I head into the fourth period--"Hibernation"--covering the worst cold days of the year-- December/January/February. These three months are always the most difficult for me because of their emphasis on family and celebrations, while I am distracted by empty dinner tables, missing family members, and the anniversaries of some of the most difficult times of my life. But I will also enjoy the days when dusk falls very early and I can close the shutters and light the fireplace. There is a peace in solitude that allows deep breaths, a straightening spine, and hope for better days to come. Contrary to popular opinion, real hibernation involves much more than sleep. For a writer, it’s a period of drudgery—of reading the final versions of a manuscript over and over again. But it’s also a period of evaluation, self-reflection, and a marshaling of resources, a necessary period of hatching and rejuvenation for new projects to come.

So, there’s my rough schedule for the months that lie ahead. In the next few days, I intend to lay out my specific plans. Stick around and you’ll find out where my next efforts are leading me.

Posted by Carolyn Schriber at 2:22 PM