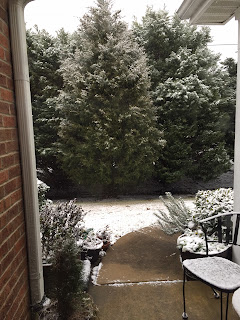 Well, I've almost made it through this day -- the first anniversary of Floyd's death.  Not the best of times to be isolated in the house after a snow, particularly when Facebook decided to surprise me with a "Memory from 2015," which turned out to be his photograph. Caught me by surprise! I really wish they'd stop doing things like that. When I checked the block that said I didn't want to see tany more memories, their response was "Oops Sometimes we get it wrong." Yep.

My goal has been to keep busy, so I've written a chapter in my next book  and cleaned out the freezer compartment of my refrigerator.  What a horror show that has turned out to be. With no one here to bug me about being neat and orderly, I've been shoving stuff in for as long as  I could find an empty corner. That worked until yesterday, when I reached for something and started an avalanche. I'm embarrassed to admit I found one item dated in 2010.  Goal accomplished now, but I may not be able to move the garbage can when I have to push it to the curb on Monday!

As for commenting on our "snowstorm that wasn't," there's not much to say. A friend from  the Military Writers Society of America, however, has posted a wonderful set of instructions on how to survive a blizzard.  I've shared it over on my Katzenhaus website, and I invite you to go here to enjoy it.

Stay warm tonight, and good luck to all the people on the east coast who are facing real dangers from this storm. Keep them in your thoughts.

Posted by Carolyn Schriber at 3:08 PM