The article I have re-posted below reminded me of a tradition I had forgotten.  If I had remembered it earlier, I might have included it in "Yankee Reconstructed." I suspect the Schwimmer family would have observed it, and the Greater Aiken Grocery Company would surely have been closed today.  Sigh!  Too late now! There's always that moment when a book is published and the author suddenly knows -- not WHAT was written but what SHOULD have been written. Maybe that's what keeps us all writing -- the never-ending quest to get it exactly right.  Thanks to my Ohio cousins who accidentally reminded me of this as they announced the day's closing of their store -- the one that served as a model for the Greater Aiken Grocery Company.

This post on Old Christmas was originally published in 2011. If you missed it the first time, here’s another look at the story behind this tradition, observed today in Amish communities.
Today, January 6th, is the Epiphany.  It is also known as “Old Christmas”.  From the Pinecraft Pauper: 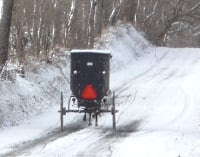 January 6th is still widely observed as a holiday by many plain folks, who commemorate the Epiphany with rest and fasting.  The Epiphany, traditionally, is the day in which the wise men brought gifts to Jesus.  However, January 6th is called “Old Christmas” because in 1582 Pope Gregory XIII deleted ten days, eleven minutes, and fifteen seconds from the calendar, to realign it with the seasons of the year, thus technically moving Christmas from Dec. 25th to Jan. 6th.
The Scotch-Irish Mountain folks up in Tennessee still call the 6th “Old Christmas”.  Their tradition has it that one ought never lend anything to anybody on that day, for the lender will never get it back.

January 6th is “Old Christmas,” a tradition the Amish brought with them from 18th-century Europe. The Millers keep it as a family day, with visiting and feasting much like that on Christmas Day, but no gifts are exchanged. Amish businesses are closed on this day.
“We just enjoy a day at home,” Mary says.

Making the switch to the Gregorian calendar must have been interesting.  You would go to sleep one day and wake up “ten days later”.
Calendar reform was implemented at different times in different countries in the centuries following the Pope’s decree.  Four countries implemented the change on the intended date.  In Spain, Italy, Portugal, and the Polish-Lithuanian Commonwealth, October 4, 1582 was followed by October 15, 1582.
As the years went on, time due to the miscalculation in the previous Julian calendar accumulated.  This meant countries who adopted it later had to make a change of more days.  When Britain (and the American colonies) adopted the calendar in 1752, it was necessary to add 11 days.  In Russia, the change was not implemented until 1918.  At that point, a shift of 13 days was required to correct the discrepancy.
Others implemented the new calendar in odd ways.  Sweden gradually shifted into the new calendar over a period of 50 years, which included adding an unusual February 30th in the year 1712.  Greece was the final Eastern Orthodox European country to get with the program, with February 15, 1923 followed by March 1, 1923.

Posted by Carolyn Schriber at 7:24 AM