Light the Bonfire. It's Time to Remember the Fifth of November. 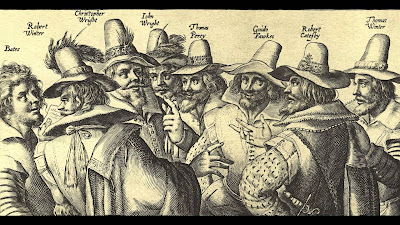 Over 400 years ago, a young Englishman converted to Catholicism, changed his name to Guido, and offered his military services to the Catholic Spanish army against the Dutch Reformers who were spreading Protestantism in northern Europe. When that war ended, he returned to England and became involved with a group of conspirators planning to blow up the government, assassinate James I, and and place the Catholic James II on the throne of England.

They somehow gained access to cellars beneath Westminster Palace and began stockpiling gunpowder directly under the chambers of the House of Lords. As these things have a way of happening, word leaked out and on the night of November 5, 1605, Guy was caught with the gunpowder. He was tortured for several days and then hanged. That was the origin of the holiday English-speaking peoples know as "Guy Fawkes Day."

What a great holiday it is! There is no big meal to be cooked. Stores don't start their sales at 6:00 AM. No gifts to buy. No cards to be mailed to people whose faces you can't recall. No chipmunks singing silly songs. No catalogs filling your mailbox. No gaudy decorations put up three months in advance. No lies to tell your children. And nobody arguing about whether to call it Guy Fawkes Day or Guy Fawkes night.  Just a gentle little bonfire at the end of the day, or a few fireworks to light up the sky.

Best of all, everybody celebrates. If you side with the conspirators and wish they had managed to blow all those bewigged lords and pompous noblemen to kingdom come, then you celebrate the sheer gumption and ingenuity of these simple men who planned to take on their own Goliath. And if you're horrified by the idea of assassination and think this treacherous little bastard got exactly what he deserved, then you celebrate the foiling of the Gunpowder Plot as a sign of the power of the English monarchy. It really doesn't matter which side you take. Everyone likes a cozy fire on a chilly November evening.

The only remaining question is why this article is appearing on a blog dedicated to the stories of the McCaskey family. There is a connection, The first book I published after retirement was  "A Scratch with the Rebels," the story of the 100th Pennsylvania Regiment in the Civil War.* My great-uncle James McCaskey was a sergeant in Company C. The regiment was known as the Roundheads because, almost to a man, they were Scotch-Irish immigrants and staunch Calvinists. They believed they were the natural descendants of Oliver Cromwell's Roundheads during the English Civil War and that God had predestined them to be victorious.

Uncle James and the rest of the Roundheads knew all about Guy Fawkes, and they were definitely on the side that said Fawkes got what was coming to him. Did they celebrate the day? Well, on November 5, 1861, the regiment was on board a large ship, so there were no bonfires. But they made up for that two days later by filling the sky with real fireworks as they attacked the Confederate fortifications on Port Royal Sound, South Carolina.  The next year? By then Uncle James was dead, a victim of his own staunch beliefs that sent him walking confidently into a hail of cannon fire.  But that's another story.

Remind me to switch on the fireplace tonight.


*Shameless Plug: The last few copies of this book are available at 75% off on my website:
http://www.katzenhausbooks.com/The-Remainder-Table.html
Posted by Carolyn Schriber at 6:45 AM