A Good Reason to Get Your Flu Shot

Though the Great Plague gets more press, the 1918 influenza pandemic was much more deadly. It it one reason that both sides in World War I came to the peace table as it killed hundreds of thousands of young men in barracks and camps and made a growing manpower crisis critical. The epidemic spread slowly, but I've seen few signs that people recognized it in its early stages. 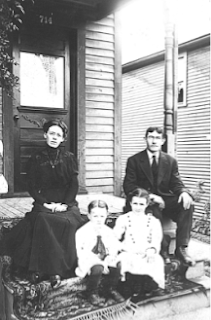 It certainly affected my family in western Pennsylvania in the year before anyone called it a pandemic.. In the notes I am assembling for my book on my mother's family, I find that my first cousin,  Electa Smith,  died at the age of 17 from the flu.  The year was 1917.  Her mother  (the oldest of the eight McCaskey girls)  died shortly thereafter of  "a broken heart," and her brother, Clair, was left with a permanent stutter from the grief that engulfed his family. 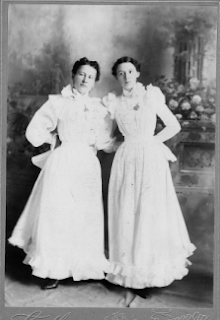 This picture has a bit of mystery behind it. That's Electa on the left. The other girl, referred to only as "Carrie", seems to have been an orphan that the Smiths took in to help around the house.  After both Electa and Ella died, Harry married Carrie. There's a story there, somewhere, but I doubt I'll find it.
Posted by Carolyn Schriber at 6:00 AM